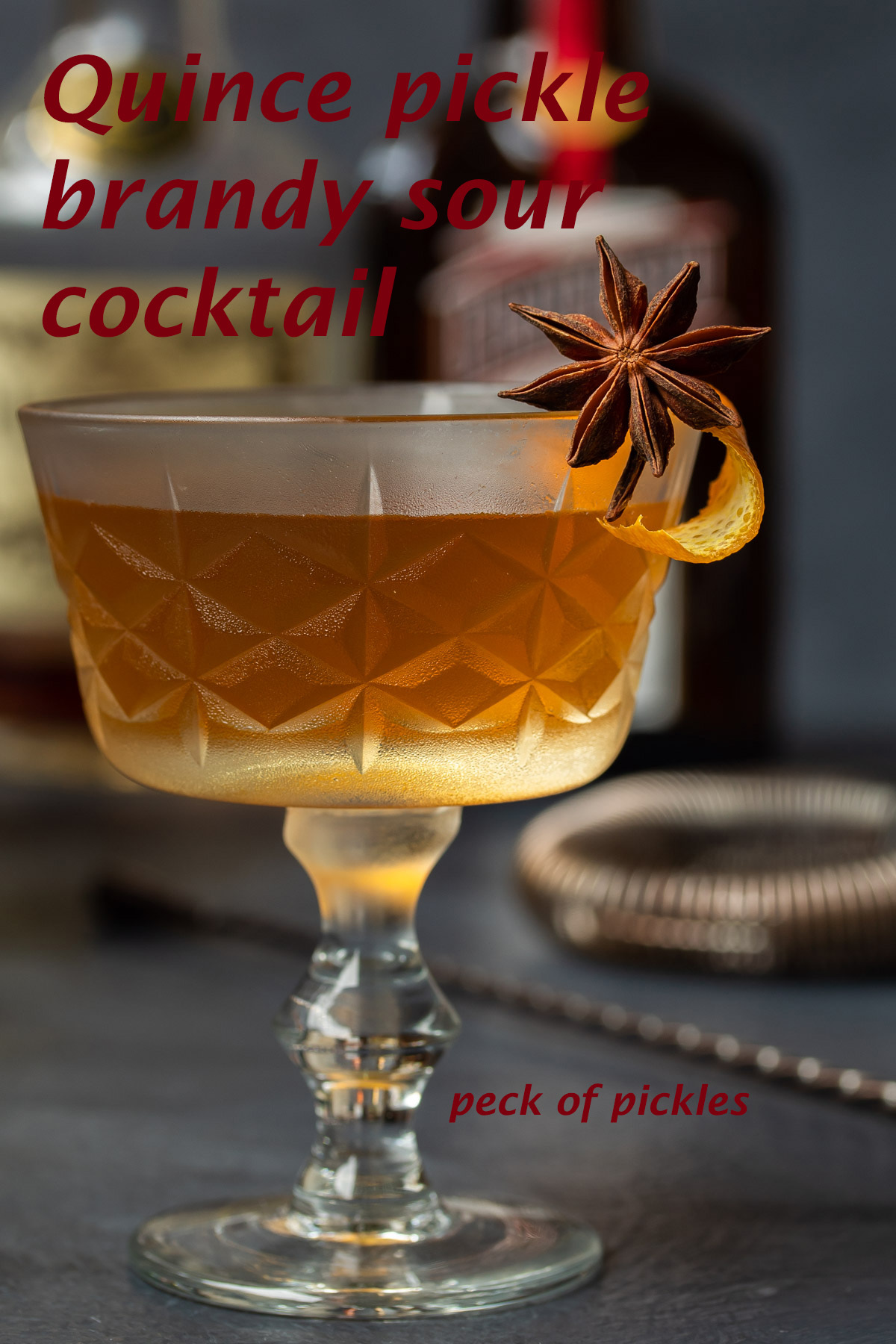 Brief history of the Sour recipe and related cocktails, Daisy, Sidecar
What is a Brandy Sour cocktail? – Cocktail historian David Wondrich (2015: 112) writes in Imbibe that the Brandy Sour is one variation on the Sour recipe – sours could be made with brandy, whiskey, gin or Santa Cruz rum – and have their origins in much earlier punch recipes. The punch formula included spirit, water, sugar and a souring element such as lemon or lime, along with spice – see my punch post for more about the history of punch and a recipe for coconut palm arrack punch. Wondrich (2015: 115-119) elaborates that the Brandy Sour called for brandy, water, sugar and lemon. Interestingly the spice element important in punch is missing from the Sour recipe and from the brandy variation of this.

Evolution of the Sour recipe – Wondrich (2015: 113, 115-119) in Imbibe describes how the Sour first appeared in 1856 along with the Fix, but went through variations in the 1880’s where the recipe became fancier with a change from sugar dissolved in water to sugar syrup, addition of curacao, seltzer water, added after mixing the drink to top it off, and a more elaborate garnish such as pineapple, orange slices and berries.

Can sours include egg? Egg Sour recipe – Sours could include egg as part of the recipe and there was an Egg Sour which called for brandy, curacao and a whole egg (Wondrich 2015: 118).

Daisy – Wondrich (2015: 119, 126-132) points out that the Sour is closely related to the Daisy cocktail which was also subject to a process of recipe evolution with earlier versions in the 1870’s calling for gum syrup, orange cordial, lemon, spirit and seltzer water and later ones from the 1910’s calling for lemon, powdered sugar, grenadine, spirit and seltzer water served over ice with a fancy fruit garnish, mint and straws.

Sidecar – The Sidecar cocktail is another later related cocktail that includes similar ingredients to the Sour brandy cocktail and is closely related to the Daisy family of cocktails – it incorporates a larger amount of orange liqueur. For a Sidecar cocktail recipe see Dale Degroff’s (2002: 186) Craft of the cocktail where he calls for equal measures of brandy and orange liqueur along with a little less lemon juice and flamed orange peel as a garnish.

Jerry Thomas’ Brandy Sour cocktail recipe and how to make it
Simple Bandy Sour recipe 1862 – The Brandy Sour recipe in the 1862 version of Jerry Thomas’ Bar-tender’s Guide (Thomas 1862: 180) is a very simple one that calls for 1 tablespoonful of sugar, ½ a wine glass of water, 1 wine glass of brandy and the juice from a quarter of a lemon to be ‘pressed in the glass’, a ’tumbler’, along with ice. Thomas (1862: 180) writes on the method of making the Sour that it’s key to ‘press’ the lemon juice and peel in the ‘tumbler’ glass to which the water, sugar and brandy are added along with ice and then stirred with a spoon:

“In making Fixes and Sours be careful and put the lemon skin in the glass.”

Fancy Brandy Sour recipe 1887 – The recipe for a Brandy Sour in the 1887 edition of Jerry Thomas’ (1887: 890) Bar-tender’s Guide has become fancier including less sugar and more ingredients notably orange liqueur, seltzer water and a more elaborate fruit garnish missing from the earlier recipe. This fancier 1887 version of the recipe calls for less sugar – a teaspoonful of sugar to be dissolved in a little seltzer water, juice of half a lemon, rather than the ¼ called for in the earlier version, a small wine glass of brandy and a dash of orange curacao, with a garnish of orange and berries in season. The larger measure of plain water is also missing from this later fancier recipe. The method described for making this cocktail in the 1887 fancier style is shaking with ice and straining into a ‘claret glass’. The method of shaking with ice and straining rather than building in the glass along with the styling of this drink in the form of glassware and  garnish have been updated from the simple tumbler to a fancier claret glass and more elaborate seasonal fruit garnish of orange and berries. Thomas (1887: 890) writes:

“Fill the glass with shaved ice, shake and strain into a claret glass. Ornament with orange and berries.”

It is this 1887 version of Jerry Thomas’ recipe which has inspired my Quince pickle brandy sour cocktail recipe. Although my recipe also draws on the relation of the Sour to earlier punch recipes and their use of spice as a key element.

Interpretation & tips from Imbibe: Brandy Sour cocktail ingredients & measures
Brandy Sour cocktail ingredients
1. Cognac – David Wondrich (2015: 115-119) in Imbibe offers helpful interpretation of the Brandy Sour recipe provided by Jerry Thomas in part through his reading of other contemporary recipes, along with tips for preparing this drink. He recommends using a VSOP cognac (Wondrich 2015: 70). I used Hennessy’s.

2. Sugar – Rich star anise simple syrup replaces sugar and water – For ease of mixing this drink and in order to infuse the spice into the syrup I have opted for a rich star anise flavoured demerara simple syrup rather than sugar dissolved in water.

Brandy Sour cocktail measures
One wine glass, or 2oz of spirits, or 2 shots, are called for in the brandy sour recipe from 1887 with the juice of ½ a lemon and a dash of curacao. I have changed the ratio of these  ingredients to better balance the pickle brine I am using – so I have decreased the brandy to 1 1/2 shots and increased the curacao from a dash to ½ shot for a little more orange flavour and sweetness.

How is the quince pickle brandy sour cocktail different?
Flavour pairing to enhance the base spirit – The quince pickle brandy sour cocktail remains faithful to the recipe appearing in Jerry Thomas’ (1887) Bar-tender’s Guide in so far as the base spirit for this drink is a VSOP cognac – I used Hennessy’s. The cognac gives this cocktail a warm boozy base although I have reduced this slightly from 2 shots to 1 ½ shots.

Orange – citrus fruit flavour, sweetness – I have included orange liqueur but increased the ‘dash’ called for in this 1887 recipe to ½ a shot to help balance the sourness of the pickle brine and to bring in orange notes that complement the quince flavour in the pickle brine and the orange twist garnish. I am with this quince pickle brandy sour cocktail heading into fancier sour cocktail recipe territory with this addition of more orange liqueur but not yet as far as a Daisy or Sidecar.

Spiced rich simple syrup – The sugar and water are replaced with a rich star anise simple syrup made with demerara sugar. This quince pickle brandy sour cocktail is still however, a short spirit forward cocktail style drink rather than a longer drink like the Daisy which is topped with a larger amount of Seltzer water.

Garnish, styling, photography – orange twist & spice – star anise – The garnish is simple, an orange twist to play on the orange liqueur and a star anise pod to mirror the spiced simple syrup and the spice in the pickle brine, adding spice and aroma. This garnish also works to highlight the glowing yellow-orange quality of the brandy and orange liqueur in the drink. The cocktail is served in a footed cocktail glass as called for in the 1887 version of Jerry Thomas’ recipe. Adding the element of spice plays on the history of the sour as related to punch which includes spice as a key element, with David Wondrich (2015: 212) in Imbibe referring to the sour and other related drinks as the ‘children of punch’.

To make the rich demerara sugar star anise syrup – add two parts demerara sugar to one part water along with a star anise pod to a small saucepan and heat over medium heat, stirring, until the sugar dissolves, allow to cool before use

Pour and strain into a prepared footed cocktail glass 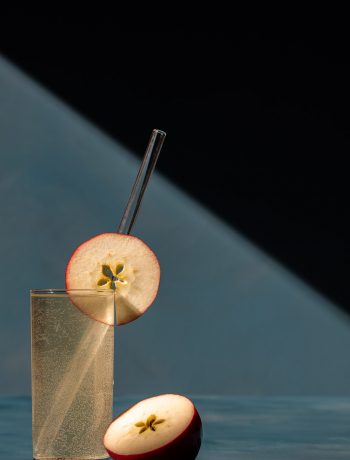 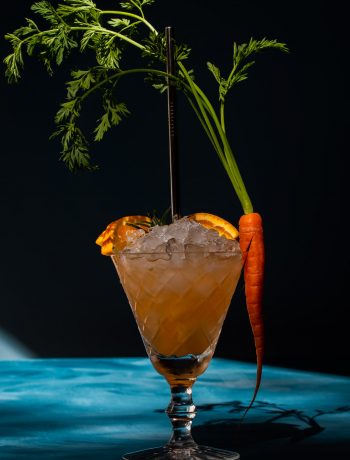 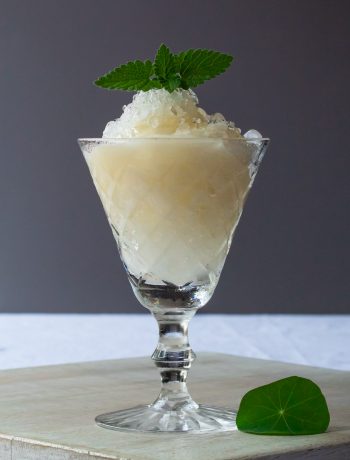