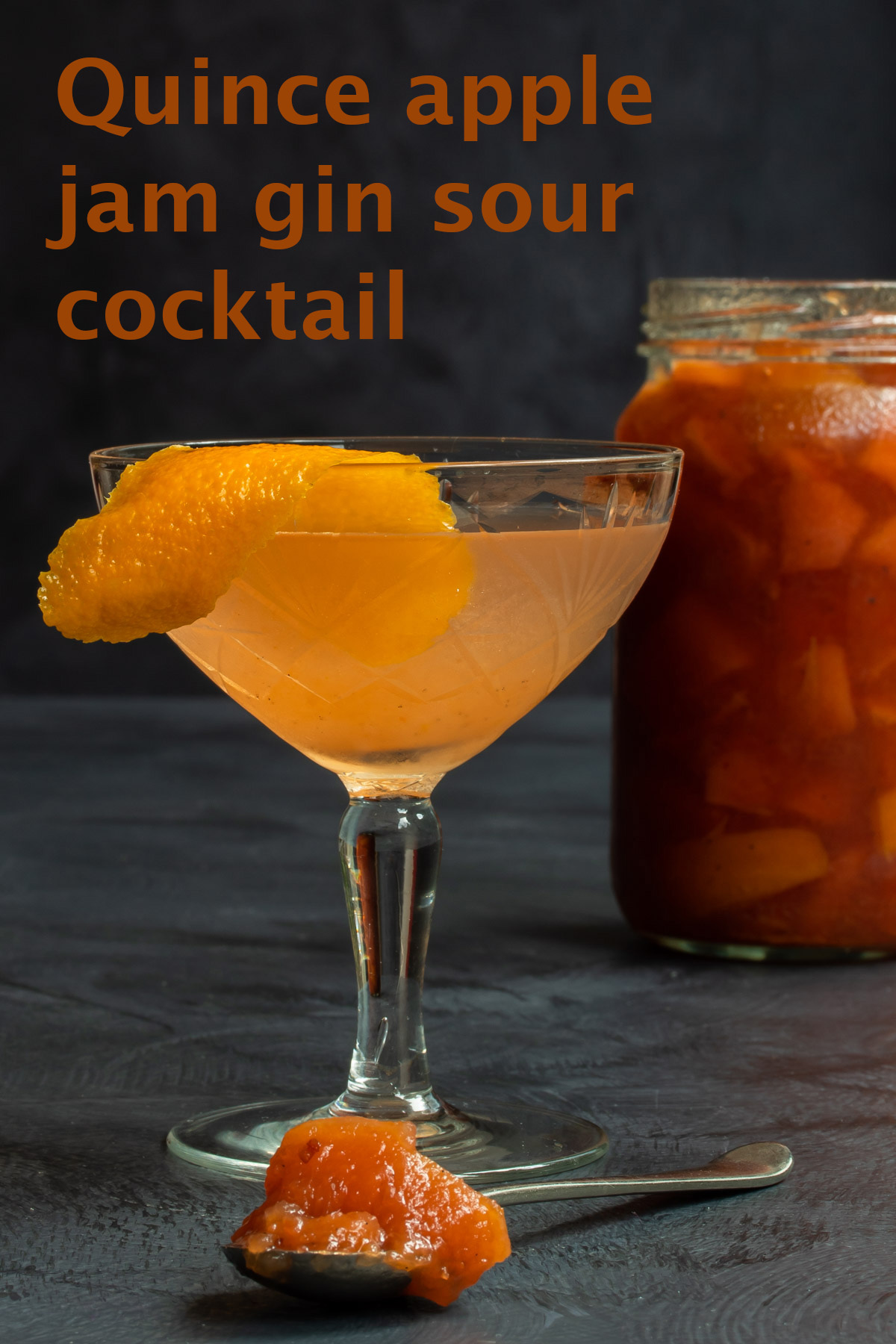 Quince apple jam gin sour cocktail is a tart, fresh, fruity, floral and spicy gin cocktail that uses rustic quince apple jam as a sweetener and flavouring agent to balance tart lemon juice, finished with an orange twist garnish. Quince apple jam gin sour cocktail is inspired by Harry Craddock’s (1930) recipe in The Savoy Cocktail Book for a marmalade cocktail using gin, lemon juice, orange marmalade, finished with an orange twist. This style of drink using lemon as a souring agent has roots in a very old drink called the sour detailed by David Wondrich (2015: 115-119) in Imbibe – which could be made with brandy, rum, gin or whisky – the archetypal sour included a spirit, sugar and lemon with a garnish of a slice or orange and berries in season. The sour is a drink that I am endlessly fascinated by as it is the precursor for so many other interesting drinks also discussed by David Wondrich (2015: 115-119) in Imbibe  including more complex versions of the sour that came to incorporate orange liqueur, seltzer water, grenadine, egg white, red wine and elaborate fruit garnishes, growing into a whole new category called the Daisy with an interesting and related tequila sour also called a Margarita (which means Daisy in Spanish). The marmalade cocktail from Harry Craddock’s 1930 The Savoy Cocktail Book follows the same structure as a gin sour but replaces the sugar with orange marmalade – thus creating a unique tart and sweet citrus flavour to complement the gin. In this quince apple jam version of a gin sour which was inspired by the marmalade cocktail recipe, I’ve used a homemade from scratch spiced rustic quince apple jam recipe and paired it with Poor Tom’s strawberry gin for a tart and fruity, floral, spicy drink in this quince apple jam gin sour cocktail. The jam adds complex sugars from the cooking process along with spices including coriander, cardamom, star anise, cinnamon and vanilla paired with the fruit and floral notes of quince and tart sweetness of fresh in season apples. I’ve chosen to keep the marmalade cocktail orange peel garnish as this adds a lifting note of sweet orange flavour and aroma that nicely complements the tartness of the quince apple jam gin sour cocktail.

How to make a gin sour cocktail with lemon, gin, sugar
David Wondrich (2015:115-119) in Imbibe provides a history of the sour cocktail recipe with the classic sour cocktail including a spirit – brandy, gin, rum, whiskey – along with lemon juice and sugar. Wondrich (2015) explains how more complex later sour variations could include egg white, orange liqueur, seltzer water and grenadine with still more complex Daisy cocktails becoming a longer drink with more seltzer water and especially grenadine and elaborate garnishes of fruit and mint, with the drink to be drunk through a straw.

How is the gin sour different?
Jerry Thomas (1862: 180) in his Bar-tender’s Guide writes that the gin sour uses sugar dissolved in water, gin, and juice from a ¼ of a lemon ‘pressed in the glass’ – he advises that it’s important to ‘put the lemon skin in the glass’ and that the ‘juice…must be pressed in the glass’. Further the gin sour is distinguished from other variations such as the brandy sour in that the fruit garnish is not used – only the juice and peel of the lemon in the glass. In the 1887 version of his Bar-tender’s Guide (Thomas 1887: 880) the gin sour calls for sugar dissolved in seltzer water, Holland or Old Tom Gin, 2 to 3 dashes of lemon juice shaken with ice and garnished with ‘orange, or pineapple and berries’. Over time the gin sour moved from being a simple gin cocktail soured with lemon juice and a lemon twist to a more complex sour still soured with lemon and garnished with a more elaborate fruit garnish along with the addition of seltzer water to dissolve the sugar.

Can you use egg in a gin sour cocktail? Egg sours & gin fizzes
David Wondrich (2015: 118, 135-40) in Imbibe writes that later variations of the sour cocktail recipe came to use egg white adding body and texture to the drink which was known as an egg sour and the sour is closely related to the longer gin fizz drink the Silver and New Orleans or Ramos versions of which called for gin, lemon, sugar and seltzer water with the Silver Fizz featuring egg white while the Ramos Fizz featured egg white and cream along with orange flower water. You can add egg white to your gin sour cocktail if you chose to. I recommend that if you wish to do this add some drops of orange bitters to finish the cocktail as part of the garnish.

Method – The method for making the marmalade is to add all the ingredients to a shaker and shake with ice and then strain, expressing orange oil over each finished drink.

Use – The marmalade adds a characteristic sweet and sour note which Craddock (1930: 1420) in The Savoy Cocktail Book argues is perfect for a before lunch drink:

“By it’s bitter-sweet taste this cocktail is especially suited to be a luncheon aperitif.”

Jam as a sweetener – Jam used in cocktails replaces or is used in addition to another sweetener – whether this is the old fashioned super fine sugar in the classic sour or the simple syrup of later variations.

Jam as a flavouring – Jam adds more than simply sweetness to a cocktail – it adds jam flavour with fruit, spices and complex sugars developed through the cooking process.

Method for mixing a drink with jam – When using jam or marmalade it’s worth giving your drink a little extra shake to disperse the sugars and flavours more thoroughly. Alternatively, you can dissolve your jam with a small amount of hot water to make a jam syrup prior to adding it to your shaker. If you are using chunky jam give it a muddle along with your other ingredients prior to mixing your drink. If you do not like to have peel in your finished drink and you are using marmalade or other jam with citrus zest double strain your cocktail using a fine mesh strainer.

Choosing the gin – I chose a local Sydney based gin – Poor Tom’s Strawberry gin – to add an additional sweet fruit flavour to this cocktail. If you do not have access to Poor Tom’s use your own favourite gin.

Lemon as souring agent – The lemon juice used here is balanced by the sweetness of the quince apple jam.

Shake with ice & strain – The method for making the quince apple jam gin sour cocktail is the same as that used for making a gin sour or a marmalade in that the ingredients are shaken with ice and then strained into a prepared cocktail glass. The jam does tend to stick together so I suggest a really vigorous shake is a good idea and if you don’t like to have any bits of jam you can double strain – I found the particles are quite small and it was ok to single strain.

Presentation, experience & garnish – The quinces also lend the drink a gorgeous pink-orange hue that complements the already pink shade of the strawberry gin. The orange twist garnish adds a sweet orange lift of aroma and flavour to the quince apple jam gin sour cocktail that contrasts nicely with the tartness of the lemon and quince. Homemade jam offers a way of introducing bespoke seasonal flavours into cocktails in this case quince, apple and spice. There is some preparation involved in making your own homemade jam, but it is well worth the effort to be able to preserve and enhance seasonal flavours such as those of apple and quince and I have provided helpful tips for making this jam in a previous post to make it easier for the novice jam maker.

Strain into a prepared cocktail glass 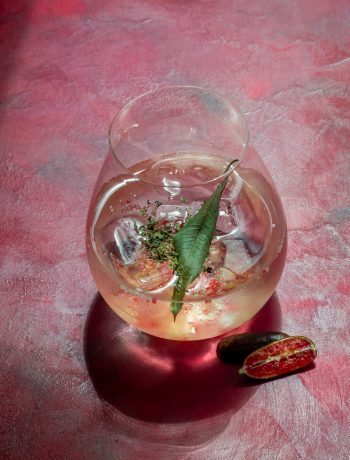 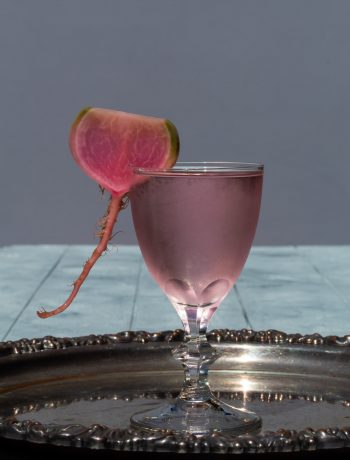 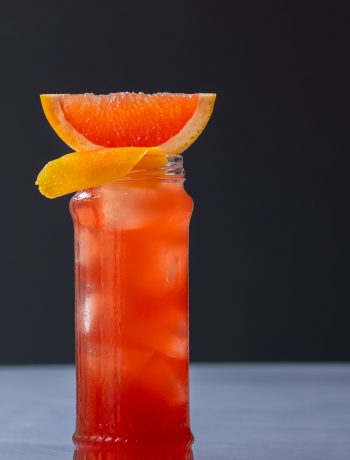