What is a posset?
A posset is a hot drink from the 15th Century using milk or cream curdled by fortified wine or ale and in later versions from the 16th Century cream, eggs and sugar and citrus as a curdling agent as detailed in The Dead Rabbit Drinks Manual (Muldoon & McGarry 2015: 2459). Cloake (2013) writing for The Guardian details that from the 18th Century posset became thicker and more pudding like with the addition of ground almonds, crushed biscuits or egg yolks. Possets according to Ysewijn (2016) writing for The Guardian were believed to be a cure all, for all kinds of ailments. They were served posset pots that had double handles and a spout for drinking. Jim Newcomb of The Sommelier Update relates that posset comprised 3 distinct elements once the curdling agent had worked: the alcoholic liquid, the custard and the foamy top lay referred to as ‘the grace’. The liquid was drunk through the spout of the posset pot while the custard and grace were eaten with a spoon. Possets evolved into cold set puddings in later times and posset-style drinks that incorporated cream and were served cold. Fore more about the history of related hot egg flip cocktails see my Spiced pickled cherry chocolate sherry flip recipe.

How is spiced sherry ‘Sack’ posset: pickled cherry, cinnamon sugar different?
My spiced sherry ‘Sack’ posset: pickled cherry, cinnamon sugar offers a modern interpretation of vintage posset recipes making these accessible to contemporary cooks and cocktail enthusiasts. I have created a hot spiced sherry posset cocktail faithful to the early recipes for this drink rather than a cold pudding or cold posset-style drink. There is a degree of curdling due to the addition of sherry to the coconut cream. However, the resulting custard layer is smooth and the foam creamy – a custard like smooth consistency would be a more accurate description.

Spiced sherry ‘Sack’ posset: pickled cherry, cinnamon sugar as a posset primer
The vintage recipes create a large amount of posset – sometimes using up to 18 egg whites and 8 yolks and 4 cups of ‘Sack’ as in Sir Kenelm-Digby’s (1669) recipe in his book The Closet of Sir Kenelm-Digby Knight Opened. The version I have created is based on the amounts needed to retain Hannah Wolley’s (1672) recipe proportions in her Queen-like closet for a single egg which is enough for 2 small sherry or dessert sized glasses which is more than enough for 2 people as the posset is quite a rich, spiced warming drink.

Choosing the Ingredients
Sherry: Is sherry ‘sack’ wine?
Hannah Wolley’s (1672) recipe calls for a ‘Sack’ – at this time ‘Sack’ was used to refer to fortified wine, notably from Jerez in Spain. ‘Sack’ wine is generally no longer available except in some instances where companies have made this part of the name of their product. ‘Sack’ was characterised by being sweet and aged in oak: two options for trying now are an Oloroso drier style aged in wood and a sweeter Pedro Ximenez. I chose to use Pedro Ximenez sherry which has rich fruit flavours that work well with cinnamon, nutmeg and mace. For more information and sherry tasting notes see Michael Schachner’s article in Wine Enthusiast Magazine.

Spices
I have used the spices that are detailed in the vintage recipes: cinnamon, nutmeg, mace. If you are unable to find mace you can substitute allspice. I have omitted the musk and ambergris (petrified whale vomit) which was used to garnish some possets such as Sir Kenelm-Digby’s (1669) recipe, instead opting for cinnamon sugar that is more in line with Hannah Wolley’s (1672) description of ‘serve it with beaten Spice strewed over it very thick’ and my own addition a spiced pickled cherry.

How to make a sherry ‘sack’ posset
Recipes or ‘receipts’ as they were called from the 1600’s may not separate the ingredients from the method rather relating a back and forth between the ingredients and the steps to combine them. These aspects are not treated separately. In some cases, measures for ingredients are not provided and the reader is asked to add sugar or sherry to taste as in Wolley’s (1672) recipe that I have been guided by – because the measures for sherry and sugar were not provided I have consulted some of her other recipes and one from Sir Kenelm-Digby (1699) to provide a guide on the amount of sherry and sugar to use.

Measurements for posset ingredients
Wolley’s (1672) recipe ‘167. To Make a Sack Posset’
I have adapted the proportions for the spiced sherry ‘Sack’ posset: pickled cherry, cinnamon sugar recipe by using as my main point of reference Hannah Wolley’s (1672) recipe ‘167. To Make a Sack Posset’ – this recipe includes a measure for the eggs 12, and the cream, 2 quarts. The sherry or ‘Sack’ and the sugar are to be added to taste: ‘as much sugar as will sweeten it’ and ‘so much Sack as will make it taste well’.

Posset primer ingredient  measures: small batch 1 egg hot sherry posset cocktail for 2 people
I have therefore used the 1 pint of ‘Sack’ as a guide, for sherry to be used for 12 eggs, as to be the amount used by both Wolley and Kenelm-Digby. For the sugar measure I have erred on the lower side of the equation with the ½ pound recommended by Wolley in recipe 68. I can advise that the resulting recipe is delicious so adding sherry and sugar to taste does work and could be adjusted to your own taste.

To make the posset primer recipe on a smaller scale for 1 egg and enough for 2 people I have divided all the measures by 12 and converted to metric.

Posset consistency, texture, mouth feel
These proportions produce a smoothly layered hot spiced drink with 3 layers: alcoholic liquid, custard and a lighter top foamy layer. The smoothness of the posset was surprising to me as I had read of it as being curdled – I think a more apt description is perhaps a custard like consistency with a liquid and light element below and above. Wolley (1672) interestingly has another recipe called ‘22. To Make the Froth posset’ this recipe provides a very nice description of the 3 layers of the posset in this instance achieved by separately beating the eggs:

“…you may know when it is enough [ie when it is ready] by putting your Spoon into the Basin, for then it will be clear in the bottom, Curd in the middle, and Froth on the top.”

In recipe 68 and 167 Wolley (1672) details that the eggs should be carefully combined with the ‘Sack’, to prevent ‘curd[ing]’: ‘stir them well that they curd not’. While in recipe 167 she also indicates that the cooked posset should be tested for readiness and transferred to a ‘bason’ to set ‘gently’ so as to avoid what she calls ‘whey[ing]’: ‘then put it into a Bason with the ladle gently; if you do it too much, it will whey, and that is not good’. These rules for treating the posset suggest that rather than a roughly curdled consistency the smoothness of the posset was a sought after quality with ‘curd[ing]’and ‘whey[ing]’ to be avoided – a smooth custard like consistency is what is sought after.

Beating eggs – until glossy and aerated

Constantly mixing or ‘pour[ing] it on high’ (Kenelm-Digby 1672: 115) – while combining heated spiced cream slowly with beaten eggs (with or without the sugar and sherry) to avoid ‘curd[ing]’ or ‘whey[ing]’ as Hannah Wolley (1672) refers to this.

Re-heating – once combined and completely smooth the posset is gently reheated until warmed through and hot.

Sit to set – The contents of the posset mixture curdle, but it appears to be completely smooth at the point at which it is combined and reheated to thicken it. The separation into 3 distinct layers only occurs after the posset is left to sit still to set in a warm place – such as a hot saucepan with a lid or a basin over a hot water bath. The separation that occurs is into a liquid layer at the base, a creamy custard layer and a lighter layer at the top.

Modern hot sherry posset cocktail: Spiced sherry ‘Sack’ posset: pickled cherry, cinnamon sugar
I have followed Wolley’s (1672) method and the resulting posset has a creamy and smooth consistency with a liquid alcoholic layer that settles at the base, a creamy delicious spiced custard and a small amount of lighter creamy layer on top. This is a delicious hot spiced sherry cocktail that is finished with cinnamon sugar and a spiced pickled cherry. A wonderful hot sherry cocktail to offer warmth and the heat of sweet spices to ward off the coming cold of winter.

Heat coconut cream with spices, except for cinnamon sugar

Meanwhile beat the egg until well aerated and glossy

Return the mixture to the saucepan

Add the sherry and demerara sugar

Check that the posset has set like a custard, but will still have a liquid alcohol element and a foamy top layer referred to as ‘the grace’ – by gently tilting the saucepan, you will be able to see the custard forming around the edges of the saucepan

Garnish the posset with cinnamon sugar and a spiced pickled cherry

Hannah Wolley (1672). The Queen-like Closet or Rich Cabinet Stored with all manner of rare receipts for preserving, candying and cookery. Very pleasant and beneficial to all ingenious persons of the female sex

Felicity Cloake (2013). How to make the perfect lemon posset. In The Guardian.

Regula Ysewijn (2016). Historic recipes: sack posset, a rich pudding to cure all ills. In The Guardian. 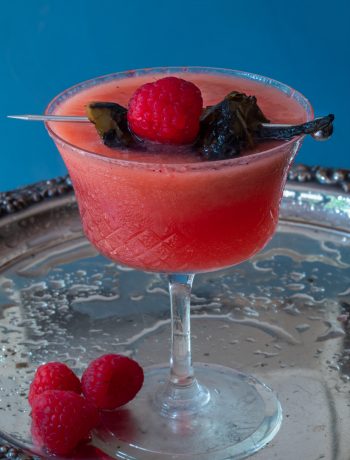 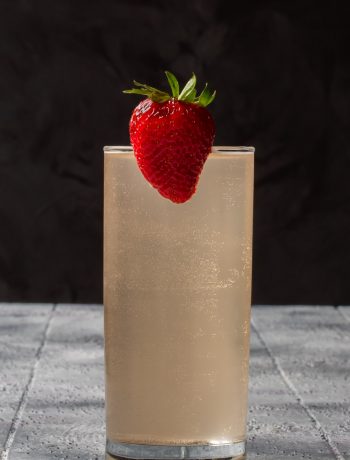 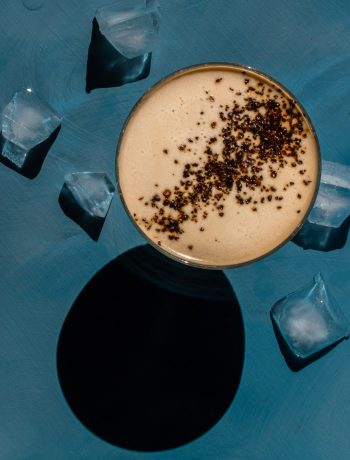